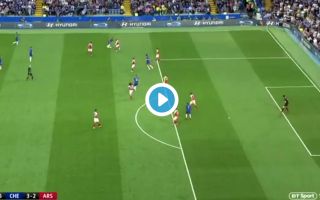 A fine piece of play from Eden Hazard allowed Marcos Alonso to put Chelsea ahead against Arsenal with just a few minutes left this evening.

The Belgian, who came on as a sub in the second half, skipped past Hector Bellerin before firing a great low cross towards Alonso, who swept the ball home to give the Blues the lead.

Chelsea fans will be delighted to see Hazard back to his best, and will surely be wanting to see the Belgian star start for their side from now on.

Arsenal are down once again
Marco Alonso steps up for the blues #CHEARS pic.twitter.com/fNlMbI1YaF

Don't let this Marcos Alonso goal make you forget that he killed an innocent girl. pic.twitter.com/eXblSorK2m