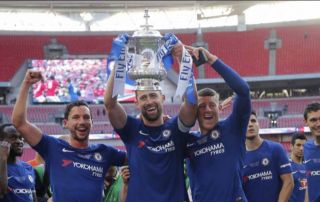 Chelsea’s Danny Drinkwater could be on the way out of Stamford Bridge, with the club willing to listen to loan offers for the 28-year-old who has failed to live up to expectations following his move from Leicester last year.

This is according to the Daily Mail, who note that the club are open to offers for the midfielder.

Drinkwater was one half of a formidable midfield partnership with N’Golo Kante, as Leicester defied the odds to lift the Premier League title in the 2015/16 season.

After Leicester’s title winning triumph, Chelsea signed N’Golo Kante, and then added Drinkwater to their ranks the following season for a reported fee of £35m, according to BBC Sport.

Although since moving to Chelsea last summer, Drinkwater has failed to live up to the fee that brought him to the club.

The midfielder was plagued with injury problems and delivered poor performances on the pitch last season which now leave the 28-year-old headed for the exit door at Stamford Bridge.

Under Maurizio Sarri’s new regime it appears as though there is no space for the former Foxes star, with Chelsea’s midfield ranks full to the brim with stars such.

New signing Jorginho, World Cup Winner N’Golo Kante, loanee Mateo Kovacic, the resurgent Ross Barkley and youngster Ruben Loftus-Cheek who impressed for England at the World Cup all seem to be ahead of Drinkwater in the Chelsea pecking order.

With most European League’s closing their transfer windows on August 31st, Drinkwater may be forced into plying his trade abroad if he wishes to get his career back on track.