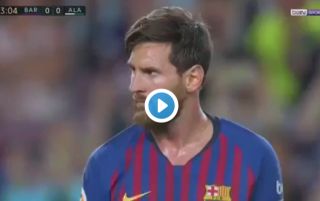 Lionel Messi scored a stunning free-kick to open the scoring for Barcelona last night, a goal that was the club’s 6000th in La Liga.

Having been frustrated by Alaves all throughout the first, the Argentine finally broke the deadlock for the Blaugrana with a set-piece that, if scored by anyone else, would probably be one of the best goals of their career.

Messi later added to his tally with one of the last kicks of the game, two goals that sandwiched a strike by Brazilian superstar Philippe Coutinho, as Barca got their La Liga campaign off to a flying start.

Here’s a clip of Messi’s fine free-kick. We’re not even surprised at this stuff anymore, at this point, we sort of just expect it.