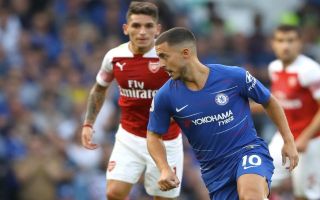 Chelsea will try to persuade Eden Hazard to remain at Stamford Bridge by offering him a new big-money contract extension as his current deal runs down.

Hazard joined the Blues back in 2012 from Ligue 1 outfit Lille in France and has since gone on to make over 300 appearances for the club, scoring 89 goals. The Belgian winger quickly established himself as one of the most exciting prospects in European football during his early years at Stamford Bridge, dazzling opposition defences with his superb dribbling skills and guile in possession.

At international level with Belgium, the 27-year-old has fared just as well, winning 92 caps for his country and scoring 25 goals in the process. He was on display for Roberto Martinez’ side in Russia at the World Cup this summer, once again standing out from the crowd and helping drive the team forward towards the semifinals, where they eventually lost to France.

Hazard has already made a huge impact on Chelsea’s start to the 2018-19 Premier League campaign, despite only featuring from the bench in their opening two matches. The magical midfielder helped Maurizio Sarri’s men finish off Huddersfield last week before once again being the catalyst for their second-half domination against Chelsea on Saturday, setting up Marco Alonso to score the winner in a 3-2 victory.

According to The Daily Mail, Chelsea will now look to reward their star player with a new wage packet of £300,000 a week and a contract extension, after continued reports linking him with a move away to Real Madrid or Barcelona in Spain.

Blues supporters will hope that Hazard signs on the dotted line and pledges his long-term future to the club because, given the rarity of his immense talent, it is unlikely they could ever hope to replace him in the team with anyone better.

Chelsea’s next league game is against Newcastle United on Sunday, with Hazard in line for his first start of the new season at St James’ Park.