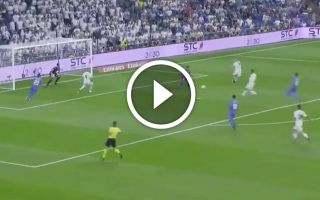 Gareth Bale is up and running for the season after he scored in Real Madrid’s 2-0 win over Getafe in their La Liga season opener on Sunday night.

Dani Carvajal had given the reigning European champions the lead in the first half, with Julen Lopetegui undoubtedly desperate to make a positive start to the league campaign.

SEE MORE: Why Real Madrid didn’t push through with transfer for €120M Serie A superstar

Particularly after their defeat to Atletico Madrid in their UEFA Super Cup clash last week, the pressure was on Los Blancos to provide a response and they did so with a solid performance.

However, Lopetegui will have been delighted to see Bale open his account for the La Liga season, as he forced his shot into the back of the net after some excellent work from Marco Asensio, as seen in the video below.

The Spaniard initially pressed the Getafe defence into a mistake to regain possession before dribbling down the left flank and cutting back a perfect cross into Bale’s path, as he did the rest.

In turn, the early signs are promising between the pair as they’ll be crucial in Cristiano Ronaldo’s absence after his summer move to Juventus, and it’s a case of so far so good in terms of the league.

Bale has made no secret of craving a bigger role at Real Madrid, and it looks as though he’ll get one and in turn, he gave himself a confidence boost by getting his first goal of the season so early.