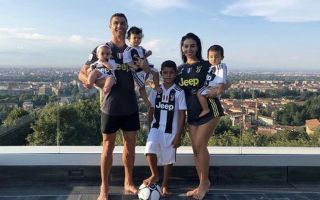 Juventus striker Cristiano Ronaldo took to social media on Tuesday to post a stunning photo of him with his family at their new home in Italy.

The Portuguese maestro joined the Old Lady this summer after switching from Real Madrid in a £99.2m transfer which shocked the football world – as per BBC Sport. Ronaldo had enjoyed 9 hugely successful years at the Bernabeu, winning the European Cup four times and becoming the club’s record goalscorer with an astounding 450 goals.

The 33-year-old also managed to pick up four Ballon d’Or awards for the best player in the world during his spell with the club, which increased his overall tally to five after winning the prize once during his time with Manchester United.

He has spoken of seeking a new challenge by moving to Serie A during the current European transfer window and it seems that he and his family have already settled into their new life if his latest Twitter post is anything to go by.

As you can see above, Ronaldo posed for this heartwarming picture with his four children and girlfriend today, in front of an incredibly beautiful view of Turin at their new home.

The former Los Blanco’s striker made his competitive debut for Juventus over the weekend, during their 3-2 win against Chievo Verona, but he was unable to open his account for his new club after squandering several decent goalscoring opportunities.