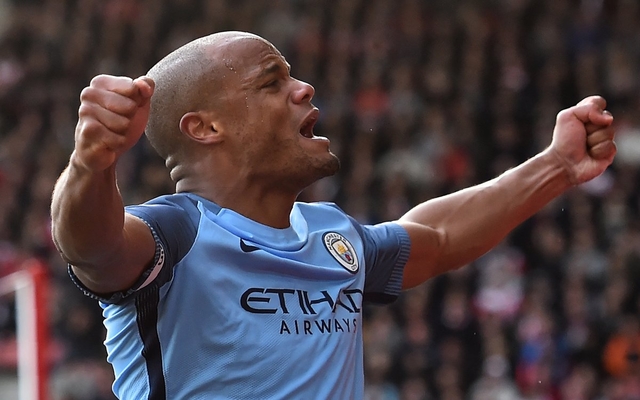 Manchester City captain Vincent Kompany believes that City will avoid complacency and finish ahead of the chasing pack once again come May.

The Citizen’s lifted the Premier League Title for the third time in 7 years last season, finishing 19 points clear at the top of the table with a record tally of 100 points. Manager Pep Guardiola has taken much of the credit for his meticulous planning and man management skills and it seems that the club is now well placed under his stewardship to retain their crown for the first time.

No team has managed to retain the Premier League since the 2008-2009 season when Manchester United secured their third successive crown under Sir Alex Ferguson, but with City’s incredible strength in depth and refreshing attacking philosophy, many experts have backed them to dominate English football for years to come.

According to Sky Sports, Belgian defender and club captain Kompany has revealed that he feels there is a ‘different’ feeling about their most recent success compared to the last two league title triumphs he was involved with and he states that City will not take their foot off the pedal in pursuit of more success.

“I can only say it’s different from previous years we have won the league,” the veteran defender told Sky Sports.

“There’s been so many warnings we have had and every single time we almost have to fight against ourselves and our nature, not to fall in the same trap as the other teams have done, my teams included, a few years ago.

“I’m not saying we are going to do as well as we did last year, but if it happens that the season is going to be different then it has to be because of the other teams being stronger, not us being weaker.”

Manchester City, Liverpool, Tottenham and Chelsea are already leading the pack in the Premier League after the opening two games of the new season, but Guardiola’s side set down the most ominous marker to the rest of the contenders with a 6-1 rout of Huddersfield on Sunday.