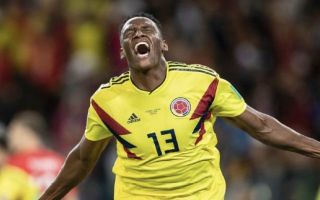 Everton defender Yerry Mina could return to Barcelona in 2020 after the buy-back clause in his contract was revealed on Wednesday.

The 23-year-old defender joined Barcelona from Palmeiras in January but only managed to make 6 appearances for the club before being shipped off to the Premier League with Everton for £28.6 million this summer – as per The Daily Mirror.

Mina’s stock rose considerably after his performances for Columbia at the World Cup in Russia this summer, where he scored three goals for his country as they reached the last 16 of the competition. The young centre-back is a towering presence at the back with fantastic ability in the air and an aggressive, physical streak which makes him a nightmare for opposition attackers.

According to The Mirror, Barcelona have the opportunity to bring him back to the Camp Nou in two years time, however, they would have to pay almost double the amount they sold him for, with the buy out clause fee set at £54m.

Should Mina develop into the world class defender that he has all the attributes to become during his time on Merseyside, then the fee in question would still be great value for the Spanish giants, but it could end up being a big blow to Everton.

The Blaugrana kicked off their latest La Liga campaign against Deportivo Alaves on Saturday, running out 3-0 winners in front of a packed crowd at the Camp Nou thanks to a brace from Lionel Messi and a Phillipe Coutinho goal.

Only time will tell whether or not the club was too hasty in letting Mina leave so soon after being brought to Spain, but the reassurance of having the option to bring him back in the future should at least ease any guilt if the Columbian hits the ground running in England.

‘I think people enjoyed it’ – Messi opens up on rivalry with Ronaldo ahead of Barcelona’s match with Juventus October 22, 2020 18:25
FC Barcelona