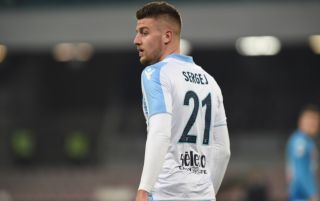 AC Milan and Juventus will reportedly suffer a setback in their pursuit of Lazio’s Sergej Milinkovic-Savic as he looks set to sign a new contract with the capital club.

As per The Guardian, both Italian giants were heavily linked with a swoop for the 23-year-old this past summer, but Friday’s transfer deadline in Italy passed with neither able to prise him away from the Stadio Olimpico.

While the Serbian international continues to impress having bagged 14 goals and nine assists in 48 appearances last season, it appears as though he could remain at Lazio, or at the very least the club are making their move to strengthen their position if their rivals come calling again next year.

According to Calciomercato, he is edging closer to signing a contract renewal with Lazio which will tie him to the club until 2023, and it’s even suggested that he could put pen to paper as early as next week.

Milinkovic-Savic has showcased his quality in Serie A over the past two seasons to emerge as one of the most talented players in Europe.

With his physicality, defensive solidity and attacking threat, he has the all-round game to potentially become a dominant midfield player in the future, as he’ll continue to develop and mature with experience.

With that in mind, it’s no surprise that both Milan and Juventus were linked with a move this past summer, but with neither able to get a deal over the line, time will tell if it becomes increasingly difficult to convince Lazio to sell in the future as the contract renewal will surely ease any pressure to sell.

From Milinkovic-Savic’s perspective, that would also suggest that he’s happy to remain in Rome and continue to improve with Lazio looking to break into the Champions League qualification places this season.