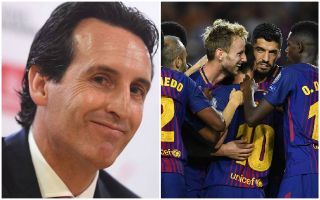 If the France international were to make such a move, he’d be reunited with his old manager at Borussia Dortmund, Thomas Tuchel.

The German tactician replaced Unai Emery at PSG this summer, with the Spaniard heading to Arsenal to replace the departing Arsene Wenger.

This puts PSG in a potentially strong position, especially with Don Balon suggesting Dembele is aware he’d get more of a key role at Tuchel’s side than he’s had during his time at Barcelona so far.

Despite arriving at the Nou Camp as one of the brightest prospects in Europe, the 21-year-old has struggled to live up to expectations and to hold down a regular place so far.

It could be that Ernesto Valverde will give him more opportunities this year after a slow settling in period affected by injuries, but it seems a late move to PSG can’t be ruled out either.

If he were to move, he’d link up with Kylian Mbappe and Neymar in a fearsome-looking attack at the Parc des Princes.