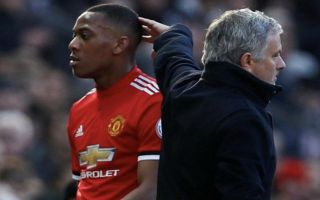 Jose Mourinho and the Manchester United board were reportedly split over four players in this summer’s transfer window as they vetoed a number of the Portuguese’s top targets.

While Mourinho wanted to sign the likes of Willian, Ivan Perisic and Toby Alderweireld, all 29, the United board were not ready to invest in these short-term fixes to the squad.

On top of that, there was also disagreement over Anthony Martial’s United future, with the club not keen on selling the player, according to the Manchester Evening News.

This certainly seems to point towards a big contrast in how the Red Devils boss and his superiors view the running of the club and what’s needed for the team to do better this season.

Some more investment was surely necessary after United finished so far behind Manchester City last term, though the board may also feel they’ve already given Mourinho plenty to work with.

Big names like Paul Pogba, Romelu Lukaku and Alexis Sanchez have come in during Mourinho’s reign, and it could definitely be argued that another manager would perhaps be able to do more with this group of players.