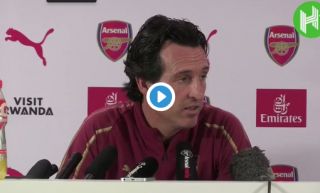 Arsenal fans may want to watch this Unai Emery video for an exciting glimpse into how highly he rates youngster Matteo Guendouzi.

The French teenager has made a real impression for the Gunners since joining from Lorient in this summer’s transfer window, despite not arriving as the biggest name by any means.

Guendouzi has shown remarkably maturity and quality in midfield in his first two games against Manchester City and Chelsea – quite a step up from the opponents he will have been up against in Ligue 2 last season.

MORE: “Not a real man” – Some Arsenal fans think they know the real reason Unai Emery left Mesut Ozil out vs West Ham

In this clip shared by Simon Collings, it’s certainly apparent that Emery’s eyes seemed to light up when asked about Guendouzi’s progress.

The 19-year-old certainly seems a special talent, and this reaction sheds some light on to how much he’s impressed a manager with pretty high standards…

Unai Emery rarely that animated in his press conferences, but his description of how surprised he was by Guendouzi got him going. pic.twitter.com/CwefwmvSxi