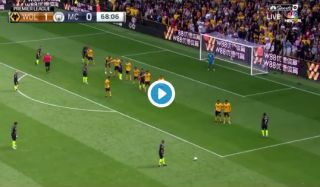 Manchester City scored a well-worked equaliser through Aymeric Laporte against Wolves today, with a video of the goal below.

The Frenchman, who joined City from Athletic Bilbao in January, has found the back of the net for Pep Guardiola’s side for the first time, and it was a superbly-taken effort.

Wolves had taken the lead through a controversial Willy Boly goal, but City will hope they can now work their way back to picking up three points.

Liverpool fans and pretty much everyone else, however, would surely dearly love another fluke Wolves effort to bundle its way in after getting their hopes lifted this afternoon…