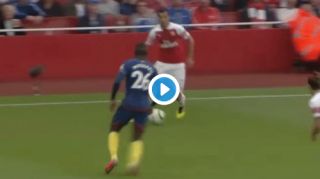 Nacho Monreal scored Arsenal’s first goal at the Emirates Stadium of the Unai Emery era with this well-taken equaliser against West Ham.

The Spaniard broke forward from left-back to connect with a cross from the man on the opposite flank, Hector Bellerin.

West Ham’s defending was not at all convincing as Monreal found himself with the time and space to steady himself before firing home well.

Monreal has a decent scoring record from the back in recent times and showed again what an important player he could be for Arsenal this season by bringing them level here.

Emery, meanwhile, will be glad to see his Arsenal side score after going behind again following two defeats in his first two games in charge.

They were beaten 2-0 at home by Manchester City on opening day and then 3-2 away to Chelsea last week.