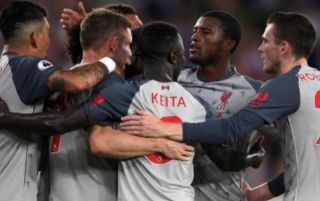 Liverpool fans hailed midfielder Georginio Wijnaldum this evening for his dominant performance in the 1st half of their game against Brighton.

Wijnaldum’s position in the Reds’ side may have been under question this summer following the acquisitions of midfielder’s Fabinho and Naby Keita.

However after today’s performance, it seems like the Dutchman is perfectly capable of keeping one of the two out of Jurgen Klopp’s starting XI this season.

The former Newcastle man was influential throughout the first half, and the midfielder was one of the key reasons that Liverpool went into the break with a 1-0 lead.

The home side took the lead in the 21st minute, after some high pressing from Roberto Firmino allowed him slip in Salah, who finished well to put the Reds one goal up

Take a look at how fan’s reacted to the former Newcastle man’s performance:

The pressing and finish for our goal was class! Wijnaldum is on another level this season so far! #LFC

If you have a secret you can tell it to Gini Wijnaldum, because that lad doesn’t give anything away

Keita has unleashed another side to Wijnaldum and it’s saucy.

A player actually getting unlocked by Keita, unlocking Pogba my arse

??? Gini Wijnaldum completed 100% of his 46 attempted passes in the first half. Really enjoying him in the No. 6 role.

Gini Wijnaldum has been phenomenal. Keita seems to compliment him really well and has brought a new lease of life into his game. Very controlled in possession and looking to push on.

If Wijnaldum is to continue turning in such high level performances for the Anfield outfit, we could see him cement a solid first team place for the club this year.