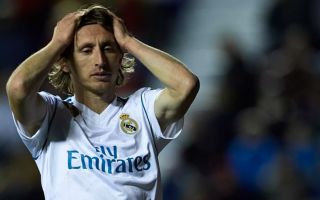 A spate of recent decisions from Florentino Perez have led Luka Modric to become quite unhappy with the Real Madrid chairman, according to Don Balon.

As per Don Balon, Modric was left angry for weeks with Los Blancos president Perez after he let Cristiano Ronaldo join Juventus, and failed to bring in a replacement for the Portuguese superstar this summer.

See More: Marco Asensio learns who will be Real Madrid’s next Galactico transfer

It’s easy to see why Modric is angry with Perez, as it’s hard to see where the club are going to get their goals from this season.

With Karim Benzema being severely out of form these past few seasons, combined with the injury proneness of Gareth Bale, Real may struggle to score the amount they did last season without the former Man United star in their ranks.

Ronaldo contributed a large amount of goals to Real’s side last year, and losing him is surely going to play a huge part in their season ahead.

A lot of Real fans probably feel similar to Modric this summer, as they would’ve surely expected to see their side dip into the transfer market to sign someone capable of replacing Ronaldo at the Santiago Bernabeu.

Only time will tell if Real have made a mistake by letting Ronaldo go, something that we feel may come back to bite the club, and manager Julen Lopetegui, in the near future.