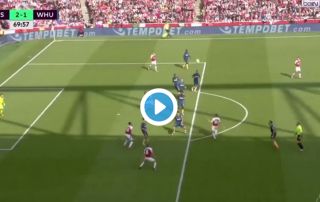 Arsenal took the lead against West Ham in the second half this afternoon, after Issa Diop turned the ball into his own goal following a cross from Alexandre Lacazette.

The Gunners, who fell behind in the first half thanks to a goal from Marko Arnautovic, however Nacho Monreal drew them level minutes before half time.

Lacazette turned out to be the provider for Arsenal’s second strike, as the Frenchman saw his cross turned into the Hammers goal by Diop.

Here’s a clip of Arsenal’s goal. Looks like the north London side finally have things going for them as they close in on their first win under Unai Emery.

Lacazette doing well to assist the own goal from I.Diop to make it 2-1 to The Arsenal! ???? pic.twitter.com/ArC9lYJaCW