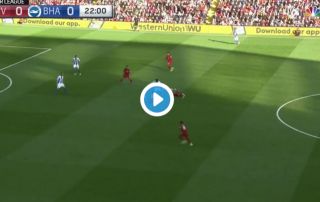 Roberto Firmino set up Mohamed Salah this evening to give Liverpool the lead against Brighton at Anfield.

The goal, which came in the 21st minute, came after some high pressing from Firmino allowed the Brazilian to slip in Salah, who finished fantastically to put the Reds one goal to the good.

The goal was Salah’s second goal the season, as the former Chelsea man picks up from where he left off last year by bagging his 29th goal in 29 appearances at Anfield in all competitions since his arrival last summer.

Here’s a clip of Salah’s strike. The technique needed to place it in from there is ridiculous!