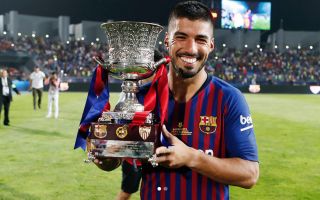 Barcelona are eyeing a big name forward to replace Luis Suarez, a player who seemed to be on a slight decline last season for the Catalan giants.

Lozano only joined PSV from hometown club Pachuca last summer and was very impressive in his debut Eredivisie season, scoring 17 goals and adding 8 assists in just 29 appearances, a total that helped fire the Dutch giants to the Eredivisie title.

31-year-old Suarez didn’t deliver the important goals that Barca fans have come to expect last season since he made the switch to the Nou Camp from Liverpool. in 2014.

The Uruguayan was only able to score once in the Champions League last year, as the Blaugrana were which saw famously knocked out by Italian side Roma in the Quarter Finals.

Lozano is currently operates in the inside forward role, and hasn’t looked all that comfortable when deployed in the centre forward on occasion.

The ceiling for Lozano is very high, and it’s worth noting that the prolific Suarez also started his career as a wing-forward before becoming more of a central striker during his time at Anfield.

At the age of only 23-years-old, Lozano could easily adapt his game to start playing more centrally, and there would be no better place to do that than at the Camp Nou.