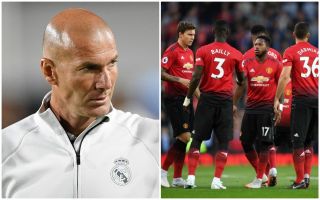 Zinedine Zidane to Manchester United could really be happening, people – at least that’s what sources close to the Frenchman told CaughtOffside he’s confident of happening.

The former Real Madrid manager would undoubtedly be a popular choice among many disgruntled United fans, with Jose Mourinho not exactly impressing since taking over in 2016.

The Portuguese has struggled to restore United to their former glories, whilst looking past the peak of his managerial powers himself.

New United signing, Fred, however, has spoken about Mourinho’s situation as speculation hots up that his position is in some danger.

The Daily Mirror have reported of the ‘toxic’ atmosphere at the club, claiming that if it’s a choice between Mourinho and Ed Woodward for the exit door, it’s the manager who’ll get the chop.

Fred insists he’s a big fan, though, and says he hopes he’ll be working with the 55-year-old for a long time to come, in what could be seen as a subtle message to the board as they ponder bringing Zidane in to replace the Special One…

Zinedine Zidane to Manchester United speculation is growing, however

“I’m really happy to be working with Jose Mourinho,” Fred said in an interview.

“He’s a great person and he’s always keen to communicate with the squad and help people to be communicative regarding what they’re to do on the pitch.

“I’m really happy to be working with him and I hope that I’ll be working for him for a while to come.”

United take on Tottenham next – and another bad result will surely only spark more Mourinho exit rumours and talk of Zidane heading for Manchester.