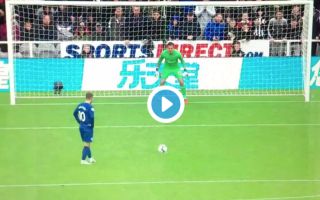 Eden Hazard scored his first goal of the season against Newcastle this evening as he put Chelsea 1-0 up front the penalty spot.

The Belgian, who’s yet to start a game for Maurizio Sarri’s side this season, gave the Blues the lead with around 15 minutes to go, as he buried a penalty that was originally won by Marcos Alonso.

Chelsea fans will be delighted to see Hazard back on the scoresheet for their side, especially seeing as it looks to have given their side a much better chance of bagging a win against one of their bogey teams.

Here’s a clip of Hazard’s spot kick. Cool as you like!