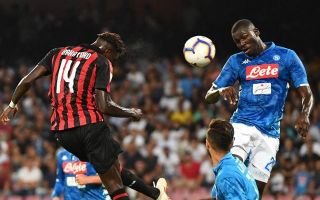 AC Milan boss Gennaro Gattuso evidently wasn’t particularly impressed with Tiemoue Bakayoko as he made his debut for the club after sealing a loan move from Chelsea this summer.

The 24-year-old secured his switch to the San Siro on loan with an option to buy for €35m next summer, as per ESPN, and after his struggles at Chelsea last season, he may well be eager to secure a long-term future with the Rossoneri.

SEE MORE: Jorginho breaks Chelsea record with stunning performance vs Newcastle – Man City will be kicking themselves for pulling out of transfer

However, it didn’t start well for him on Saturday night as Milan suffered a 3-2 defeat at Napoli, despite leading the game 2-0 after 53 minutes.

Bakayoko replaced Lucas Biglia in the second half in an apparent attempt to shore things up in front of the defence and add a bit more defensively solidity to protect their lead.

Unfortunately for Milan, they weren’t able to hold on as Napoli grew stronger as the game went on and completed their comeback with Dries Mertens scoring the winning goal with 10 minutes remaining.

Gattuso spoke about Bakayoko’s performance after the game, and clearly, the Italian tactician believes that he has a lot of work to do with the Frenchman to improve him and ensure that his stay at Milan is a successful one for both parties.

“Bakayoko has to learn how to get the ball,” he is quoted as saying by Goal.com. “We must work correctly. It will not be easy.

“One week is not enough to remove the defects of a player. I would have preferred to be managing older, more experienced club players.”

That isn’t a great first impression on his new club, and Chelsea will of course be keeping a close eye on his progress as he may well return to Stamford Bridge next summer if Milan aren’t convinced and don’t exercise the option to buy.

Nevertheless, it is one game and a 30-minute appearance at that in a difficult stadium against top class opponents who were sharper having played last weekend while Milan’s opener was postponed.

Taking things into consideration, Bakayoko will hope that he can learn from his first outing and improve quickly to establish himself in the starting line-up moving forward.