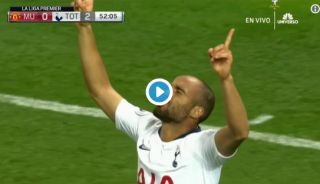 Tottenham scored two goals in as many minutes through Harry Kane and Lucas Moura to stun Manchester United at Old Trafford.

First, Kane headed home his first ever goal at Old Trafford, and moments later a superb flowing move saw Lucas finish off from Christian Eriksen’s ball into the box.

It’s not looking at all good for United manager Jose Mourinho, whose side have made a sloppy start to the season after a frustrating summer in which they only really signed one addition to their senior squad.

Now 2-0 down, United have a long way back to win from here against a big six rival…

Kane has his goal at Old Trafford!

He loses Jones and directs his header beyond the planted De Gea!