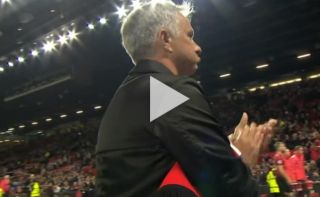 The Red Devils were well beaten by Spurs in another poor performance, making it two defeats from three games already this season – their worst record at this stage of a campaign since 1992/93.

Mourinho’s response was an intriguing one as he made a bit of a scene in this video below:

This man is absolutely finished pic.twitter.com/w26LFFbtQs

It’s not entirely clear what was meant by this stunt by the Portuguese, though it seems to be a genuine recognition of the positive atmosphere from the Old Trafford crowd.

United were not booed off after the poor performance, so Mourinho may well just be thanking the fans for sticking with the team in this difficult time.

Either that, or a more cynical person could suggest it’s a bit of a dig at his players as well, who didn’t seem to be doing the same after they could be described as having let the club down tonight.

And then there’s this interpretation…

Jose Mourinho looks like he’s about to quit, judging by his actions after the final whistle. Applauding the fans for a couple of minutes whilst picking up a United scarf. No doubt he’ll blame a lack of investment, but he has spend millions since arriving, and that is his team.

Mourinho applauding the Stretford End after the final whistle, with the United scarf under his arm.
pic.twitter.com/TJrfu7lODP