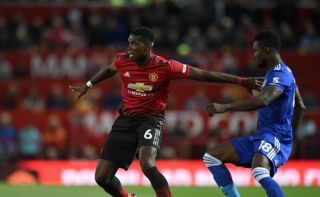 Some Manchester United fans are calling on the club to sell Paul Pogba to Barcelona after a poor performance against Tottenham tonight.

It’s half time at the time of writing, with the score level at 0-0 at Old Trafford as Pogba looks a shadow of his former self once again in a United shirt.

Despite previously being regarded as one of the best midfielders in the world at previous club Juventus, and showing glimpses of that best form for France as he helped them win the World Cup in the summer, Pogba has rarely looked close to that kind of form for the Red Devils.

Once again this evening, the 25-year-old is struggling to get a hold of this game despite United probably slightly shading it in terms of overall performance so far.

Paul Pogba is being slammed by some Manchester United fans tonight

There was one incident when Pogba passed the ball straight out of play in his own half when under some pressure – the kind of thing that sums up what looks like low confidence he always seems to show when he plays for his club.

These fans are not happy at all and want him gone…

Get pogba off and don’t play him again. Sell him to Barcelona in January for 120 million.

Pogba doesn't want to be a United player.
Sell the useless French fuck! Immediately.
Let him go teach the Barça bench how to dance.

Get Pogba on that plane to Barcelona

Can we still sell paul pogba?

Pogba is a waste of money. Sell him already!

Need to just sell Pogba to Barca and get on with the season, fuck him … His head ain’t in it, doesn’t give a fuck

Really hope we sell Pogba this week, embarrassing yet again in that first half