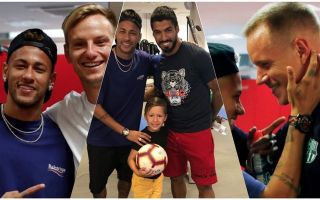 On his return to Barcelona for commercial reasons, Neymar has stopped by training and greeted some of his former teammates at the Nou Camp.

The Brazilian superstar left the Catalan giants last year to join Paris Saint-Germain, but evidently from the images below, he still enjoys a close relationship with many of his old friends.

As seen in his Instagram stories, he posed for pictures with Luis Suarez, Marc-Andre ter Stegen, Ivan Rakitic and also said hello to compatriot and Barcelona summer signing Arthur too as well as Rafinha.

According to Mundo Deportivo, the 26-year-old is in Barcelona for some promotional work for BetStars, but while in the area, he decided to pop in and say hello to some familiar faces.

As per The Sun, Real Madrid have been linked with a transfer swoop for Neymar, but given he clearly still has strong ties with Barcelona, it remains to be seen whether or not such a move will materialise in the future.

Having struck up a deadly partnership as part of a trident with Edinson Cavani and Kylian Mbappe, he appears to be enjoying himself in the French capital for now but he was clearly delighted to be back in Barcelona for the day to see some old friends.