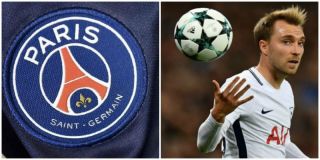 Eriksen is widely considered to be the most important part of Mauricio Pochettino’s Spurs squad, building up a reputation as one of the most creative and technically gifted midfielders in the Premier League over the last few years at the club.

The 26-year-old signed for the Lily Whites from Ajax in 2013 and has since gone on to make over 220 appearances, contributing an impressive 56 goals in the process.

SEE ALSO: PSG transfer bid for Barcelona star could be too good to turn down

His stock only rose over the summer at the World Cup in Russia too, where he starred for Denmark as they reached the last-16 of the competition, transferring his fine form at club level to the international stage seamlessly.

Eriksen has featured in all three of Tottenham’s opening Premier League games of the 2018-19 campaign and looks set to stay with the club till at least the end of the season, however, according to ESPN he had been linked with a big money move to France with PSG.

ESPN reports that the Parisian’s were reportedly lining up a £100 million bid for the Danish star, but the club has released a statement denying such a deal on Monday.

PSG officials say that the club “categorically denies the transfer rumours regarding a potential transfer of Christian Eriksen to PSG” which should put an end to any speculation surrounding the club and Eriksen for now, despite the fact that the French champions are one of the richest organisations in world football and capable of pulling off such a move.

Wins against Caen, Guingamp and Angers have given Thomas Tuchel’s men a perfect start to the new Ligue 1 season and it appears that new reinforcements being brought in before the European transfer window shuts are unlikely at this stage given this latest news.