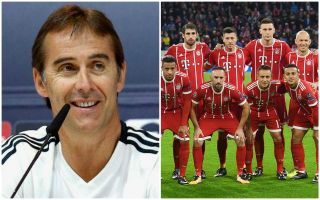 Real Madrid don’t have long to get the signings they need as the European transfer deadline is fast approaching on August 31.

Considering Los Blancos finished third in La Liga last season – 17 points behind champions Barcelona – and sold Cristiano Ronaldo to Juventus this summer, it’s pretty remarkable these famed big-spenders have not been busier in the transfer market.

Thibaut Courtois’ arrival from Chelsea is by far their most high-profile deal, and the Belgian hasn’t even become first choice just yet under new manager Julen Lopetegui – who comes in after Zinedine Zidane also rocked the club by stepping down at the end of another successful campaign last season.

In other words, Madrid fans should be hoping for a more active next couple of days from their club, and we’re certainly not short of speculation at the moment.

In need of goals, Don Balon have reported of interest in Paris Saint-Germain striker Edinson Cavani, though his club want a rather steep €100million for him.

At the age of 31, that’s a tad risky, but Real surely need someone to come in as an upgrade on Karim Benzema, who scored just five times in La Liga last season in a significant loss of form.

Ronaldo was Real’s top scorer with 44 in all competitions, and Cavani would be a very decent short-term measure after a prolific record in his time in France.

If the European Champions do decide to pay up, we can’t see this being a move they’d regret – surely they’ve got the money.

Another Don Balon report links them with strengthening in midfield with a move for Bayern Munich star Thiago Alcantara.

The classy Spain international is one of the finest players in the world in his position on his day, and would be a very useful long-term successor to the ageing Luka Modric.

Mateo Kovacic’s loan move to Chelsea also arguably leaves Madrid a tad light in that area, so Alcantara would undoubtedly be a very useful addition indeed to help the Lopetegui project get off its feet.

Don Balon suggest he’d cost around €60m – so for a combined €160m Real would be getting two world class players in key positions.

After losing Ronaldo, this is surely the kind of statement needed from the club if they are to show Barcelona they’re true title challengers this season.