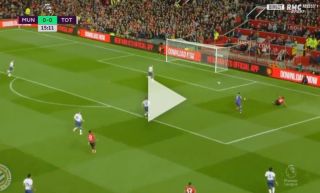 Romelu Lukaku missed an absolute sitter for Manchester United in their Premier League clash with Tottenham this evening.

The Belgium international was put through by a misplaced Danny Rose back-pass, before bizarrely missing a gaping goal when he rounded Hugo Lloris.

Lukaku shone at the World Cup this summer, but fans will wonder why he can’t quite seem to reach that level for his club.

Despite a decent first season at United last term, Lukaku went off the boil after a strong start and never quite hit the heights he showed at previous club Everton.