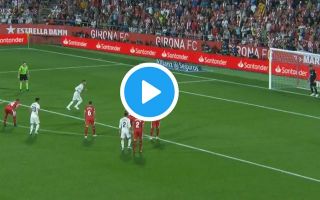 Real Madrid defender Sergio Ramos was on target in his side’s 4-1 win over Girona on Sunday night, as he produced this cheeky finish from the penalty spot.

Los Blancos fell behind after just 17 minutes in their second game of the La Liga season, but they remained patient and turned things around either side of half time.

However, the comeback started courtesy of this wonderfully sublime finish from Ramos, as he produced a chipped panenka-style effort from the penalty spot to draw his side level.

Goals from Karim Benzema (2) and Gareth Bale completed the comeback, with Real Madrid picking up two wins in two games to start the new campaign under Julen Lopetegui.

As noted by Marca, it extends an impressive record for Ramos, as the defensive stalwart has now scored in his 15th consecutive La Liga season to show that he can be a threat from an attacking perspective as well as offering defensive solidity.

The Spanish international has scored some crucial goals along the way, but that’s now 56 league goals in 432 games, which isn’t too bad for a centre-half and Real Madrid will hope that he can add a few more to his tally in the coming months while keeping things tight at the back too.

It seems that @SergioRamos has taken on the role of penalty taker since the departure of you know who. Real Madrid equalise, with five minutes to half time. #LaLiga #GIRRMA #PURESPORT pic.twitter.com/OeAwLletFS