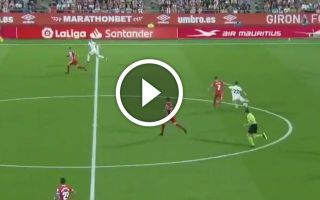 Real Madrid came from behind to secure a 4-1 win over Girona in their La Liga meeting on Sunday night, and Isco played a key role in turning it around.

Los Blancos fell behind in the 17th minute, but goals either side of half-time from Sergio Ramos and Karim Benzema helped put them ahead.

Shortly after, Isco produced the brilliant defence-splitting pass seen in the video below to set Gareth Bale through, as he then showed great pace and composure to get away from his defender before producing a great finish to extend Madrid’s lead.

That’s two in two for the Welshman to start the campaign as he looks to help fill the void left behind by Cristiano Ronaldo by taking on more responsibility in the final third, and on this occasion, he owes a lot to Isco who was instrumental to finding him to add to his tally.

The Spanish playmaker looks set for a fundamental role under Julen Lopetegui, and with vision and passing like this, it’s easy to see why he could be key to Real Madrid’s hopes of continuing to win major honours this season.

Should he continue to produce assists like the one seen below, Bale will undoubtedly be eager to get on the end of as many as possible.

Best slide rule assist of the day. It belongs to @isco_alarcon and allows @GarethBale11 to register his second of the season and put @realmadrid three goals to the good against @GironaFC. #LaLiga #GIRRMA #PURESPORT pic.twitter.com/S4f4e1Aahm