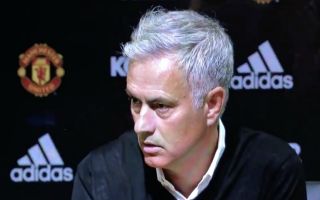 Manchester United boss Jose Mourinho made an angry exit from tonight’s press conference after his team’s 3-0 defeat against Spurs at Old Trafford.

The Portuguese boss watched on from the sidelines in horror tonight as his team slumped to a shocking loss at Old Trafford, which sees them fall six points behind Chelsea and Spurs at the top of the table.

Mourinho was in an agitated mood speaking to the press after the game, alluding to his previous success before storming out of the room in a fit of rage.

You can see the incident in full in the video below:

Just now, Jose walks out on post match press conference with this… pic.twitter.com/Cb5C9DWYeB

The United boss called for ‘respect’ but the reality of the situation is that he seems to have lost his aura as a formerly inscrutable and charismatic character, with results on the pitch taking a slide in the wrong direction along with his demeanour.