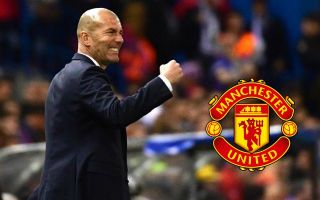 It’s not a good night to be a Manchester United fan as some on Twitter are actually begging their club to sack Jose Mourinho and bring in Zinedine Zidane.

CaughtOffside understands Zidane has communicated that he is confident he could be offered the chance to replace Mourinho imminently, according to sources close to the former Real Madrid boss.

MORE: Video: Jose Mourinho manages to mock every other manager in the PL after Man United defeat

The Frenchman seems an ideal candidate to pick up the pieces at this struggling team, with United losing again this evening in a shock 3-0 home loss to Tottenham.

The Red Devils were poor against Spurs, and have now lost two of their opening three league matches for the first time in…a very, very long time.

Zinedine Zidane did a superb job at Real Madrid

MUFC could do with a change and Zidane’s successful record at Real Madrid could make him a top candidate, with the 46-year-old remarkably winning the Champions League three times in less than three full seasons in charge at the Bernabeu.

If he could come anywhere close to that level of success with United he’d be an upgrade on Mourinho, whose side have not really made any progress since he took over in 2016, despite major spending on big-name signings like Paul Pogba, Romelu Lukaku and Alexis Sanchez.

Bring Zidane to us.

Please please please @ManUtd get mourinho out the club and bring in Zidane, had enough of this lacklustre, negative play #MourinhoOut

please united get zidane and be done with it

Zidane please save this mess with your black magic

Zidane you're all we need right now..Please come and save @ManUtd