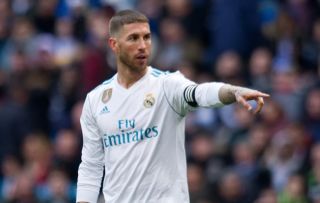 After losing Cristiano Ronaldo earlier this summer, Real Madrid have yet to strengthen their attacking options but Sergio Ramos has reportedly approved of a possible late move.

Things have started well in La Liga for Los Blancos, as they’ve picked up six points from their opening two games and have scored six goals in those outings.

With the likes of Karim Benzema, Gareth Bale and Isco expected to step up and fill the void left behind by Ronaldo, it appears to be going to plan so far for Julen Lopetegui.

However, given the Portuguese superstar’s influence on the side, it’s arguably only a matter of time until his presence is missed and so bringing in reinforcements to offer Lopetegui options up front could be a sensible move.

According to Marca, that could see them make a move for former ace Mariano, who is coming off the back of an impressive season with Lyon after scoring 21 goals in 45 games.

With talk intensifying that Real Madrid could make their move in the final few days of the transfer window ahead of Friday’s deadline, Don Balon have now reported that Ramos has given his approval to the move which will see the 25-year-old potentially act as an alternative to Benzema to lead the line.

Given his role at captain and leader at the Bernabeu, it would be no surprise if Ramos perhaps has some knowledge of what the club is planning in terms of strengthening the squad.

Taking both reports above into consideration, it looks as though Mariano is emerging as a serious target for Real Madrid but time is undoubtedly running out if they wish to reach an agreement before Friday’s deadline.