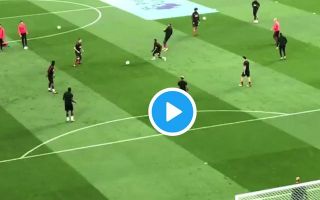 Man Utd striker Romelu Lukaku was guilty of a big miss in his side’s defeat to Tottenham on Monday night, but the warning signs were seemingly there.

As seen in the video below, the Belgian international had a great chance to get on the scoresheet against Spurs, but squandered his chance after doing all the hard work.

CHRIS SUTTON: How could Lukaku miss that open goal? United should have scored first… and they were made to pay pic.twitter.com/AK6YVIs0XL

After latching on to a poor pass from Danny Rose, he managed to round Hugo Lloris, only to send his effort wide of the open goal as Tottenham went on to punish United for it.

However, judging from the video below taken by a fan of Lukaku’s warm up, he seemingly left his scoring boots at home as he makes a complete hash of an attempt at goal as he shanks his effort well wide of the goal which draws some sniggers from those recording.

If Man Utd are to bounce back from their two losses and come back stronger to silence their critics, Jose Mourinho is going to need a clinical Lukaku to return to form as further wastefulness could be costly.

If you’re thinking that Lukaku had a bad half, you should have seen him training before the game… #MANTOT pic.twitter.com/kbOX16A4zu