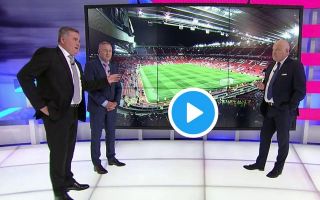 Richard Keys and Andy Gray were in discussion over Man Utd after their defeat to Tottenham, but the latter’s pick to replace Jose Mourinho didn’t go down well.

The Portuguese tactician will undoubtedly come under increasing pressure if results don’t improve quickly as his side has now fallen to back-to-back defeats to Brighton and Spurs.

That in turn has already seen them fall off the pace set by their Premier League title rivals, and they can ill-afford any more slip-ups in the near future with a trip to face Burnley awaiting them on Sunday.

Nevertheless, it seems like there is still some way to go before Mourinho becomes genuinely concerned about his position at Old Trafford, but Keys and Gray had the discussion over his future on beIN Sport, as seen in the video below.

While the presenter offered Zinedine Zidane as an option to be appointed as Mourinho’s successor, Gray opted for Roberto Martinez, which left Keys completely silent for around five awkward seconds.

There is a strong argument for Zidane given his work at Real Madrid, but whether or not Martinez would suit the job despite his impressive run with Belgium will undoubtedly spark debate.

In his defence, Gray did warn Keys that he might laugh at his pick, but it appears as though the latter simply struggled to get any words out to react to Martinez being his solution to United’s problems moving forward.

If Mourinho goes who should replace him at @ManUtd? Andy Gray’s choice stuns @richardajkeys into silence! #beINPL #MUNTOT #MUFC pic.twitter.com/IoqF7d4469

Meanwhile, as if that wasn’t enough, Sam Allardyce has seemingly joked about the possibility of putting himself in the running for the United job if Mourinho departs.

Speaking to the Alan Brazil Breakfast Show on talkSPORT, the former Bolton, Newcastle United and England manager jokingly suggested he’d put a bet on himself at 100/1 to get the job, as seen in the video below.

Would Sam Allardyce be a success at #MUFC? ? pic.twitter.com/3RpJXco618