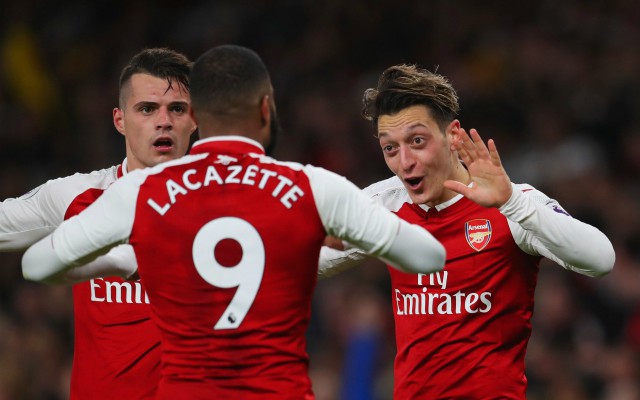 Arsenal striker Alexandre Lacazette is being linked with a late exit from the club amid question marks over his future at the Emirates.

As per BBC Sport, the Gunners are expected to pay up to £52.6m in total for the Frenchman after his move from Lyon last summer, which at the time set a new club record with his transfer fee.

SEE MORE: Unai Emery tells Mesut Ozil what he must do to save his Arsenal career

That has since been surpassed by Pierre-Emerick Aubameyang, and he is seemingly playing a major role in why concern has been raised over whether or not Lacazette will remain at Arsenal for the long-term future.

According to Le10Sport, the 27-year-old is considering his future with just days remaining before the summer transfer window closes for most of Europe.

Perhaps the French international’s frustration stems from the fact that he hasn’t featured as a prominent figure after the arrival of Aubameyang, as he has had to play second fiddle to the marquee signing up front for the Gunners.

Lacazette did score 17 goals in 39 games last season, but since Unai Emery took over this past summer, he has only been able to come off the bench in each of the three Premier League games so far this season.

Naturally, he wouldn’t have moved to Arsenal to be a bench player, and so it’s easy to see why there would potentially be an issue moving forward and doubts raised over his future at the club.

Nevertheless, with the window closed for English clubs already, it seems highly unlikely that Emery will allow an important figure to leave without being able to sign a replacement as he won’t be able to bolster his squad until the January transfer window.

In turn, while it may well be a concern for Arsenal fans that doubts have emerged over Lacazette’s future, it remains to be seen whether or not that leads to an immediate exit this week as he will also surely still have an important role to play as Arsenal look to compete on various fronts.