The Italian giants have contested two of the last four Champions League finals, losing out to Barcelona and Real Madrid respectively in 2015 and 2017. Despite ultimately falling short in recent times, Massimiliano Allegri’s team are widely considered to be one of the strongest teams in Europe, with a starting XI which is the perfect blend of attacking power and defensive stability.

Their squad has been strengthened even further following the arrival of five-time Balon d’Or winner Cristiano Ronaldo, who signed for the club in the summer from Madrid. He left the Bernabeu having been a key part of the Los Blancos side which has managed to win the last three European Cups in succession and he is now targeting similar success in Italy.

As The Express reports, the draw for this years group stage was announced tonight and Juventus have been dealt a difficult opening hand in Group H alongside Manchester United, Valencia and Young Boys.

United legend and Champions League winner Schmeichel acknowledged how strong the Old Lady have been over the last few years and believes that Ronaldo’s arrival will make them even more formidable, which is bad news for his former club.

As per The Express, he told reporters after the draw was announced: “Playing against Juventus, they are probably the hardest team in Europe at the moment, because of this signing [Ronaldo].

“Everyone is looking at them as rebuilding the whole Italian club football scene again.

“It’s a massive signing for them and the expectation comes with having signed him.

“I think it’s going to be really a difficult game. There’s no doubt about that.”

Red Devils boss Jose Mourinho has come under intense scrutiny in the opening weeks of the new Premier League season after his side lost two of their first three matches, struggling to create clear-cut chances and being consistently exposed at the back throughout the two defeats.

The club’s tough draw for the Champions League means that there will be little rest bite for the players or the manager, who must now pick themselves up quickly to re-emerge as a force domestically and on the biggest stage in Europe. 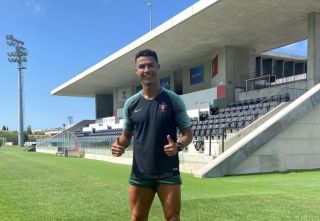 Barcelona may be counting on Cristiano Ronaldo exit to open door for superstar to be transferred to Juventus Jul 24 2021, 10:43
Juventus