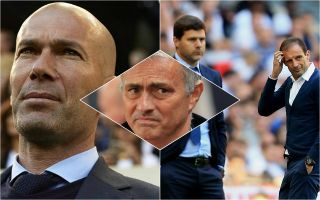 Manchester United have reportedly lined up six top candidates as potential replacements for Jose Mourinho in the event that the team’s form continues to spiral downwards.

The Red Devils have made a poor start to the season with two defeats from their first three Premier League games, with the 3-0 home defeat to Tottenham on Monday night a particularly worrying display.

However, the Independent report that Mourinho is not in immediate danger of the sack, partly due to the lack of readily available replacements at the moment.

Still, the club have six names under consideration if the Portuguese cannot lift the team out of its current slump, though speculation surrounding Zinedine Zidane may not be quite what it seems.

The report suggests United would prefer Tottenham boss Mauricio Pochettino, though they are aware that prising the Argentine tactician away from their rivals will not be easy – whether in the middle of the season or during the summer.

Zidane, however, is keen on taking a bit of a break from football which means he may not be as realistic a target as has been suggested, say the Independent, despite numerous links that the Frenchman is already gearing up for replacing Mourinho.

Zidane on Manchester United radar but other names in the frame

CaughtOffside were told by sources close to the former Real Madrid manager that he’s already spoken to both Paul Pogba and Anthony Martial about staying at the club as he expects he could be offered the job imminently.

It seems, however, that things remain unclear and other names are also in the running, with the Independent listing Juventus’ Massimiliano Allegri, Monaco’s Leonardo Jardim, Everton’s Marco Silva and France’s World Cup-winning coach Didier Deschamps as other candidates.

All have strong credentials, and it seems clear Mourinho will be under growing pressure if results don’t improve soon as all this talk of replacing him rumbles on.