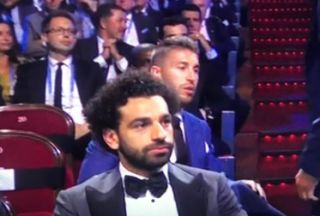 Someone at Uefa had some fun with this – Real Madrid captain Sergio Ramos is sitting behind Liverpool star Mohamed Salah at today’s Champions League draw.

A few photos of the pair are doing the rounds on Twitter, with the two players notably coming to blows in the Champions League final back in May.

Real ended up winning 3-1 that night to lift the trophy, but there was bad blood between the two clubs as Ramos’ aggressive challenge on Salah early on led to the Egyptian having to go off in the first half.

Without their star player, Liverpool never stood much of a chance, and the duo are now awkwardly close at tonight’s ceremony…

Sergio Ramos is sitting behind Salah. Whoever did the seating arrangements definitely did this by purpose ??? pic.twitter.com/5ZESqSIrUc

UPDATE: Oh my God he even touched Salah on the shoulder. Here’s an idea of how Twitter have responded…

BREAKING: Mo Salah is out of action for 3 months after Sergio Ramos touched his shoulder. pic.twitter.com/Cs2bTdwIJl

Ramos really tapped Salah's shoulder on the way back to his seat pic.twitter.com/V25HwhKSYb