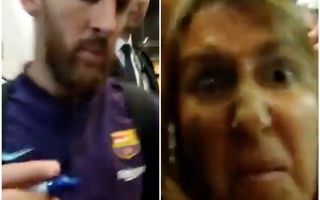 Lionel Messi snubbed a fan’s request to sign her shirt earlier this week, but there appears to be a valid reason for it while her reaction was uncalled for.

The Barcelona star was travelling with the squad after their game against Valladolid last week, and footage emerged prior to this of a young fan bursting into tears having met his idol, with the young lad seen near the end of the clip below.

However, it appears one cheeky Rosario fan tried to get Messi to sign her jersey, but the former Newell Old Boys starlet seemingly clocked on to what she was wearing and ignored her completely given the rivalry between the two clubs.

On one hand, perhaps it is poor form from Messi as it was a little bit of fun, but the fan in question was obviously doing it for the wrong reasons and her reaction showed as she is alleged to have called him ‘passionless’, as seen in the video and tweet below.

To be fair, it’s not like we’d see Messi signing a Real Madrid shirt any time soon either, so she probably should have known better than to try her cheeky request and has undoubtedly attracted unwanted attention with her remark after the snub.

Supposed “fan” thinks she a badass because she called Messi “pechofrío” to his face. https://t.co/x9o6bXkLZG

I am not sure but I think it means pattionless or cold hearted.