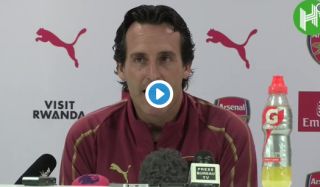 Arsenal manager Unai Emery showed he has a sense of humour today in his press conference as he answered a journalist’s phone.

The Gunners boss simply picked up and introduced himself, with whoever was on the other end quickly deciding to hang up.

MORE: The bizarre reason Henrikh Mkhitaryan won’t be allowed to play for Arsenal vs Qarabag

Emery was initially interrupted while addressing a question, but had the whole room of reporters laughing as he took a break to chat to a total stranger.

The Spaniard hasn’t had the easiest of starts at Arsenal after replacing Arsene Wenger this summer, but the pressure certainly doesn’t seem to be getting to him!

The @Arsenal boss brilliantly answers a journalist's phone during his press conference.