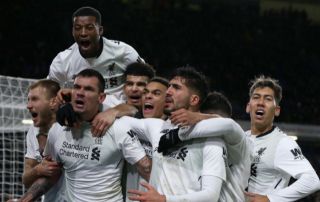 Liverpool and Croatia star Dejan Lovren has taken a sly dig at Sergio Ramos, after the Real Madrid ace was named the Champions League’s Defender of the Year for the 2017/18.

The Spaniard, who Reds fans seem to have taken a little disliking to after he injured Mohamed Salah in this year’s Champions League final in May, was given the award at the Champions League draw on Thursday.

The official Instagram account for the Champions League posted the news on their page, with Reds star Lovren seemingly taking a little dig at the Los Blancos star.

The Croat replied to the Champions League’s post with the ‘facepalm’ emoji, implying that the may have thought that this was the wrong decision to award Ramos such a prestigious award.

Dejan Lovren with the shade ? pic.twitter.com/KwjKsIr1x8

Although the Champions League final was over three months ago, it seems like Lovren is still a bit bitter over what Ramos did to Salah, and Liverpool’s chances, of winning that match, even if it he didn’t actually mean to injure the Egyptian.

Should Liverpool match up against Real in the competition again this year, it’s gonna be very interesting to see how Lovren, and his Reds teammates, greet Ramos and Co at Anfield.