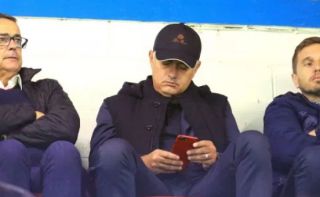 Manchester United manager Jose Mourinho was snapped taking a look at his side’s next Premier League opponents Burnley in what could be a crucial scouting mission.

The Red Devils travel to Turf Moor this Sunday for what is rumoured by some to be a pivotal match for Mourinho in terms of keeping his job at Old Trafford.

MORE: Manchester United star and agent doing everything in their power to seal January transfer

CaughtOffside have been told of some contact already taking place between Zinedine Zidane and United players as he anticipates getting an offer to replace the struggling Mourinho soon.

Meanwhile, the Daily Mail have also claimed that the Portuguese tactician could be sacked if United lose to Burnley, which would make it three defeats in a row after losses to Brighton and Tottenham.

Still, it seems Mourinho is doing all he can to ensure his side get back on track, with the Metro reporting that he made a scouting trip to watch Burnley in action against Olympiacos in the Europa League.

Sean Dyche’s side are certainly no pushovers, so Mourinho will need to have something up his sleeve for this next clash if United are to avoid another big disappointment.