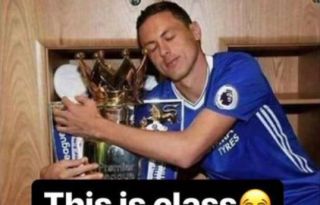 Manchester United midfielder Nemanja Matic will have made himself very popular indeed with Red Devils fans after this brutal dig at his old club Chelsea.

The Serbia international notably swapped Stamford Bridge for Old Trafford last season in a somewhat controversial move given the rivalry between the two clubs.

Matic left Chelsea a Premier League champion, and some Blues fans clearly felt like winding him up a bit with a picture of him alongside the trophy with the caption: “When you know it’s your last one..”.

Clearly the implication there is that the ex-Blue has no chance of winning a title any time soon with this out-of-sorts United side, but the player had a superb comeback to the CFC fan.

With the Europa League draw today after yesterday’s Champions League draw, Matic enjoyed the chance to mock Chelsea’s lack of top-level European football after they finished fifth in the league last season.

In response to the initial picture, Matic can be seen in the tweet above asking the Chelsea fan who they drew in the Champions League.

This United fan account unsurprisingly loved it, with the 30-year-old showing little respect to his former employers.