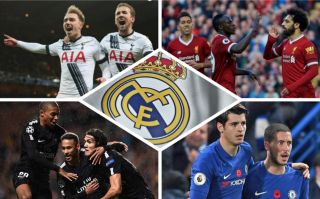 With Real Madrid having lost Cristiano Ronaldo to Juventus earlier this summer, it doesn’t take a genius to see that they surely should’ve replace him.

Los Blancos failed to do this, with the biggest names they were able to bring in being Vinicius Jr and Mariano Diaz.

However, if this report from Don Balon is anything to go by, it seems like the Spanish giants certainly tried to replace the Portuguese sensation, to no avail.

As per this report from Don Balon, all of Harry Kane, Mohamed Salah, Nemyar, Kylian Mbappe and Eden Hazard turned down moves to the Spanish capital this summer.

This news will be bittersweet for Real fans, who will be happy to hear their side were in the market to replace Ronaldo, but sad to know that they just weren’t able to get a move for any other aforementioned players of the line.

Either of these five players would’ve been fantastic additions to Real’s squad, and all would’ve definitely be capable of filling Ronaldo’s shoes at the Santiago Bernabeu.

Harry Kane and Mohamed Salah proved all their doubters wrong last year, as they bagged 30 and 32 Premier League goals respectively.

Hazard has shown during his time with Chelsea that he’s one of the best wingers in the world, and is definitely capable of doing a job out wide for Los Blancos.

Both Kylian Mbappe and Neymar are two of the biggest superstars in world football at the moment, and both has taking two starring roles during their time in Paris with PSG.

Despite all this, Real fans have gone another summer without a ‘Galactico’ signing, and it remains to be seen how long they’re willing to wait before seeing their club sign a Ronaldo replacement.