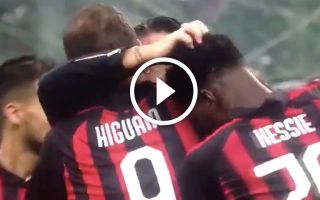 AC Milan secured a dramatic 2-1 win over Roma at the San Siro on Friday night, and it appears as though Gennaro Gattuso certainly enjoyed himself.

The Rossoneri were left reeling after squandering a two-goal lead at Napoli last weekend to lose, and so they certainly needed to boost morale with a positive result against Roma.

After Franck Kessie’s opener was cancelled out by Federico Fazio, fears would have grown amongst the Milan camp that they were heading for a similar result.

However, Patrick Cutrone had other ideas as he latched on to a superb Gonzalo Higuain assist to score in the fourth minute of injury time to secure all three points for Milan.

Naturally, after such disappointment last time out in Naples, it would have been a huge relief for Milan to bounce back with a positive performance and result and it showed after the full-time whistle.

As seen in the video below, Gattuso marched his way onto the pitch and celebrated with his players as they can enjoy three deserved points against a tough opponent. The former combative midfielder was never shy to show his emotion as a player, and he seemingly hasn’t changed one bit as a coach either…

Circus over next Spurs manager continues as key figure thinks he can persuade Daniel Levy to change his mind Jun 19 2021, 18:21
Tottenham FC