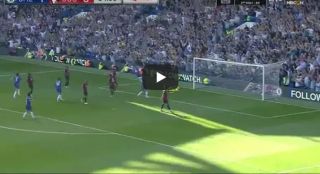 Eden Hazard scored his second goal of the season and his first at Stamford Bridge under new Chelsea manager Maurizio Sarri to make it 2-0 vs Bournemouth.

See the video below as Hazard finishes superbly after being put through on the left-hand side of the penalty area, drilling the ball home clinically to put today’s game to bed.

CFC now have a two-goal advantage after initially struggling to break down a dogged and determined Bournemouth side.

However, Pedro’s opener and now this quality second from Hazard have surely made things safe for the Blues, who look set to make it four wins out of four under Sarri.