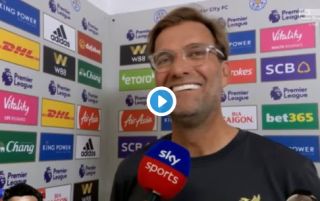 The Brazilian shot-stopper dropped a massive clanger in the second half of today’s win at the King Power Stadium, allowing Leicester to pull a goal back and ensure a nervy ending.

LFC had looked comfortable until that point thanks to first-half goals from Sadio Mane and Roberto Firmino, but Alisson showed that this risky side to his game might not be the best thing in the Premier League.

Klopp, however, says he expected this to happen given the way Alisson likes to play, and is actually glad that he picked this game to do it as it didn’t affect the result.

The German tactician added that he was impressed by his player’s response to the error as he didn’t let it or the home fans’ reaction to it phase him at all as the team held on to the win.

WATCH: Jurgen Klopp acknowledged that Alisson made a mistake against Leicester but was happy that it didn't cost Liverpool three points. pic.twitter.com/iMPYF3IdUX