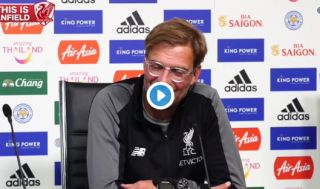 Liverpool manager Jurgen Klopp had a message for the rest of his players after Alisson made a major blunder today against Leicester City.

The Brazilian goalkeeper, normally so good with his feet, got a little over-confident and lost the ball in his own penalty area to allow the Foxes to pull a goal back.

Liverpool held on to win the game 2-1, but Klopp spoke about the incident afterwards, as seen in the video below.

The Reds boss insists that while it was not ‘cool’ of Alisson to make this mistake, the rest of his players also need to remember that the 25-year-old is merely an ‘option’ for them to look for, but not a ‘solution’.

In other words, everyone needs to stop believing the hype – he’s a goalkeeper, not a playmaker!

Wise words from Klopp below…

Klopp on Alisson's mistake – good perspective from the boss.

There’s more from Klopp in another clip below, with the 51-year-old explaining how his team can use Alisson better and learn to provide him with more options when he is on the ball and looking to make a pass, though he conceded no ‘keeper in the world should have attempted a dribble in the situation he did today…

More from Klopp as he admits "no goalkeeper in the world should dribble in that situation." pic.twitter.com/ubBdC4hevR